TRICOLOUR
Admin
posted on 1 month ago
45
views
Daniel McMahon 'cultivated a culture of fear and chaos' to further his beliefs in white supremacy, one witness said.

A Florida man who called himself "the Antifa hunter" as he waged an online campaign to terrorise and harass those who opposed his white supremacist ideology was sentenced on Monday to more than three years in prison.

Daniel McMahon, 32, of Brandon, Florida, pleaded guilty in April to using social media to threaten a Black activist to deter the man from running for office in Charlottesville, Virginia in the United States.

McMahon also admitted that he threatened to sexually assault the young autistic daughter of a North Carolina woman who protested against white nationalists.

A federal judge in Virginia sentenced McMahon to three years and five months in prison. McMahon declined an opportunity to make a public statement beforehand, but he heard from his victims during the hearing, which was conducted remotely by video conference.

In a written statement read aloud by a court employee, the North Carolina woman said McMahon methodically "cultivated a culture of fear and chaos" in her community of anti-racist activists.

"There is seemingly nothing that Daniel McMahon will not do in the name of white supremacy," she wrote.

Most of McMahon’s cyberstalking victims knew him as "Jack Corbin". Under that pseudonym, he posted social media messages intended to deter a Black activist, Don Gathers, from running for a seat on Charlottesville’s city council.

He called himself "the Antifa hunter," a reference to anti-fascist, leftist militant activists who confront or resist neo-Nazis and white supremacists at demonstrations. 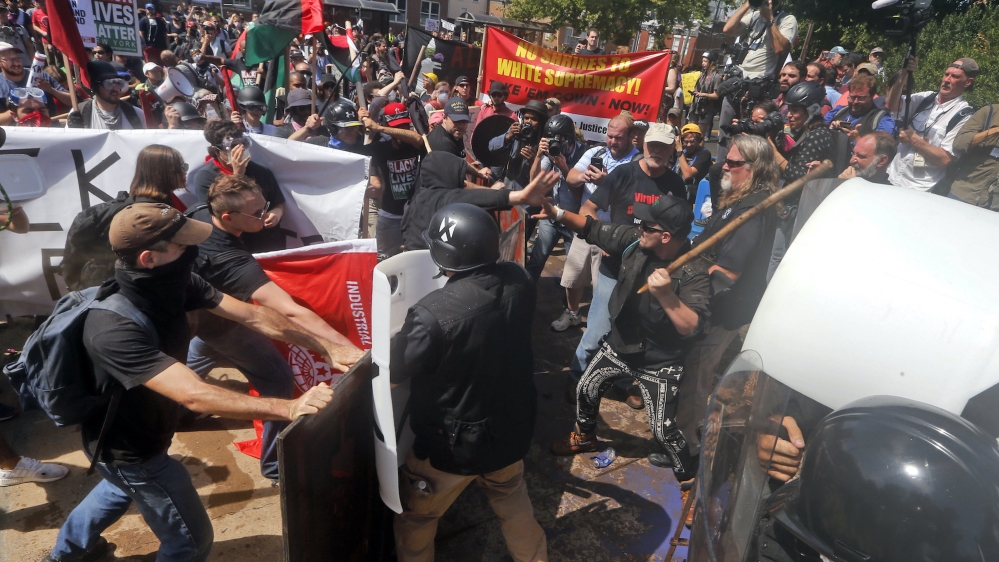 White nationalist demonstrators clash with counter-demonstrators at the entrance to Lee Park in Charlottesville, Virginia in 2017  [File: Steve Helber/AP Photo]

McMahon accused Gathers of "attacking" a white supremacist group member who later pled guilty to attacking counter-protesters at the "Unite the Right" rally in Charlottesville in August 2017. McMahon called for using a "diversity of tactics" against Gathers, which authorities interpreted as a euphemism for violence.

The FBI notified Gathers of McMahon’s threats. Instead of kicking off his campaign at a January 2019 event, Gathers announced he wouldn't run for office. "Hail Victory!" McMahon wrote in response.

On Monday, Gathers told McMahon that he prays he may find a way to forgive him some day.

"But today is not that day," Gathers added. "I despise all that you and others like you represent."

After McMahon's arrest, the North Carolina woman called federal prosecutors to report that he had threatened her and her daughter, a severely autistic minor, over Facebook and tried to extort personal information from her about another counter-protester.

The woman said McMahon sent her hundreds of threatening messages, including some detailing how he would sexually assault her daughter. He posted the girl's photo on a racist social media platform, she added. He also did a Google search for the term "sex with autistic girls" a day before his arrest, according to a court filing.

"Only a deeply disturbed individual would do this, a monster," the woman wrote. "I will never feel completely safe about my child again."

Prosecutors say the contents of McMahon's computer revealed his obsession with racially motivated violence and his hatred of Black people, including images of white supremacist James Fields plowing his car into a crowd of Charlottesville counter-protesters, killing a woman.

A folder with a racist slur for a title contained photos of dead Black men, including a lynching victim. McMahon also saved graphic images of Trayvon Martin after the Black teenager was shot and killed by a neighborhood watch member in Florida in 2012, according to prosecutors.

Other folders on McMahon's computer contained personal information about his targets, including photos of their children. One target was a woman whose child had died, a tragedy that McMahon tried to exploit to extort information from her about antifascists, prosecutors said.

The FBI found 278 files with the word "owned" in the title, signaling that McMahon had harassed that victim to his satisfaction. All told, prosecutors said, McMahon compiled 35 gigabytes of data that he could "weaponise" against his targets.

McMahon pleaded guilty to cyberstalking and bias-motivated interference with a candidate for elective office. US District Judge Norman Moon was not bound by sentencing guidelines that called for a prison term ranging from two years and nine months to three years and five months.

Moon accepted prosecutors' recommendation to impose the maximum sentence under the guidelines, saying McMahon's conduct was "as egregious as it could be". 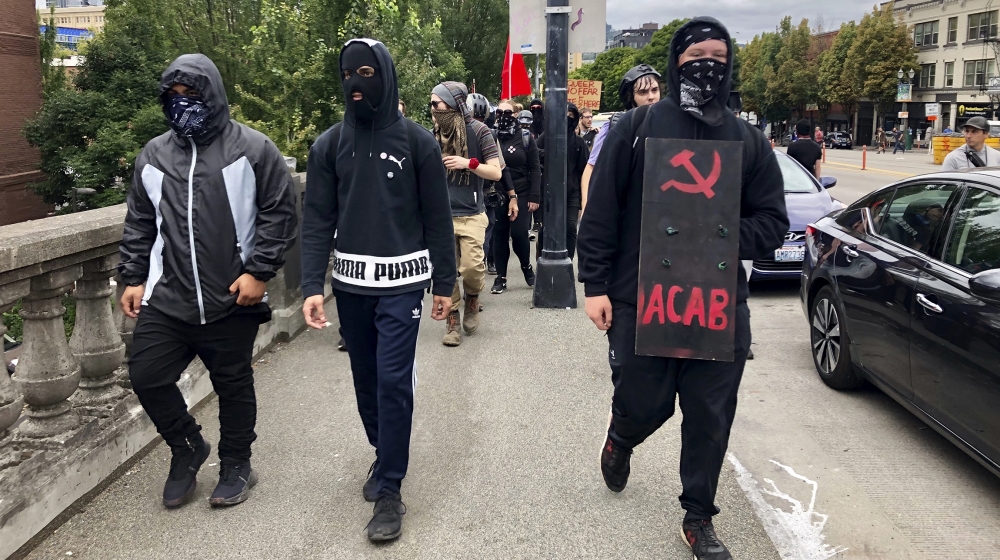 Anti-fascist counter-demonstrators cross the Burnside Bridge across the Willamette River from the west side of the city to the east side in search of the far-right group, the Proud Boys, in Portland, Oregon, in 2019 [File: Gillian Flaccus/AP Photo]

"It may not have been physically violent, but it couldn't have been more violent to one's mental health or feeling of wellbeing," the judge said.

Defense attorney Jessica Phillips asked the judge to sentence McMahon to a year and a half in prison and give him credit for time served since his September 18, 2019 arrest.

Phillips said her client made "bad choices" but is remorseful and took full responsibility for his crimes. She attributed McMahon's behaviour to an untreated mental health disorder, alcohol abuse and a "lack of social stability".

"While he did not realize the impact of his words at the time, he certainly does now," Phillips wrote in a court filing.

Gathers told McMahon that "a new day, a different day, is coming" for those who share his "pitiful views".

"Like it or not, Black lives matter," he said.